One aspect of being female is that, unless you're careful, you can become invisible. I founded Stellar Quines Theatre Company in 1993, because I felt that Scotland's female theatre practitioners – particularly women of around 35 and over – were prone to this fate.

In 1999, I left the company, and in 2000, Muriel Romanes took over as Artistic Director. Since (at time of writing this), Stellar Quines' own website presents the company's history from that juncture, I offer, in the spirit of women's visibility, the following brief history of Stellar Quines' origins.

In 1986, I joined Monstrous Regiment, often referred to as the Grandmother of British Women's Theatre. Having worked in Britain as an actor for over a decade, I was surprised on the first day of rehearsals: I looked around the room to discover only one man (an actor) in our midst: playwright (Susan Yankowitz), actors, director (Penny Cherns), lighting designer, set designer, stage management team, publicity – all were female, and this struck me as utterly extraordinary. What struck me as even more extraordinary was my own surprise. I knew that Monstrous Regiment was a women's theatre company, so what had I expected? The reality of the situation felt initially uncomfortable because of its unfamiliarity. I had often been the only woman, or one of a very small female minority, in a number of  theatre companies, but I had never experienced that gender-ratio reversed.

A few years after that, I worked with Freefall, another London-based women's theatre company, which had only just been established by Paola Dionisotti, Anna Furse and Juliet Stevenson. This group was not as rigorously attached as Monstrous Regiment was to the commitment of creating job opportunities for women – in this case, the play was written by a man (Eric Overmeyer), and a number of men were involved in various capacities within the production team.

These experiences stimulated me into thinking about the professional theatre scene in my native Scotland. As far as I knew, at that time, our only women's theatre company was MsFits, run by Rona Munro and Fiona Knowles. This was very much a vehicle for Rona as a playwright and Fiona as a performer, and their excellent productions were therefore usually one-woman shows.

I was 33 by this stage, had become a mother, and wasn't being offered quite so many of the 'ingenue roles' – the majority of parts for women in most plays fall into this category. It seemed to me that just when  women have earned some life experience, enabling them to contribute something of real value to the art form, the opportunities to do so simply didn't exist – or were perhaps not being excavated. I felt that Scotland should have its own Monstrous Regiment – I favoured the model that would consciously create opportunities for women in all areas of production. 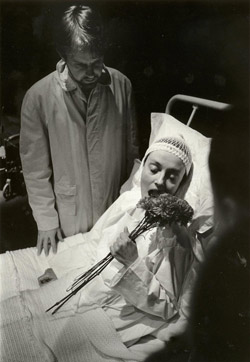 I had what I thought could be the inaugural play – Night Sky,  written by Susan Yankowitz,  with whom I'd already collaborated, through Monstrous Regiment. I approached Lynn Bains, Head of Acting at Queen Margaret College (like Yankowitz a New Yorker), to direct Night Sky. The play is about communication, and was written at the suggestion of Yankowitz's friend, the renowned director Joseph Chaiken, who had become aphasic following a stroke. Before embarking on the central role of 'Anna' in Night Sky, I researched aphasia for three months at Queen Margaret College Speech and Language Therapy Department in Edinburgh – my first contact with S.A.L.T., which I found fascinating. (See article on speech therapy with my daughter on my website, under heading Down's Syndrome.)

Lynn and I approached Morag Ballantyne, a theatre administrator (now arts consultant), who was working at the Traverse, and her husband Iain Carmichael, who works in business. The four of us became the core of the new company, which I named Stellar Quines – quines being a fine old Scots word for a girl – or a lass - carrying a connotation of a feisty nature.

Night Sky was produced on a profit-share basis, with no Scottish Arts Council support, and it was agreed that any profits should be ploughed back into the company. I seem to recall the handsome sum of £84!