Writing
From The Herald, Poem of the Day, selected by Lesley Duncan, Poetry Editor, 29/04/2020 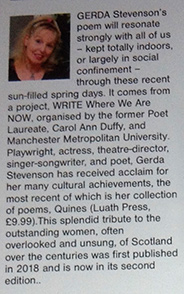 Poems in tribute to women of Scotland 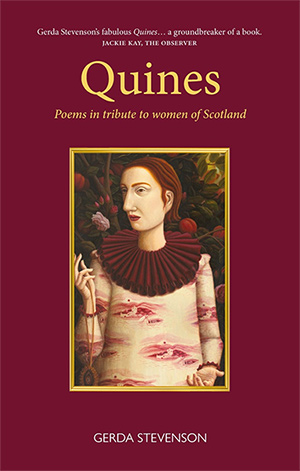 "A project of dazzling literary scope and vision. The collection shines a radiant light into the dark corners of unwritten womens history. DUNDEE UNIVERSITY REVIEW OF THE ARTS.

'QUINES is as much a product of cultural activism as it is the product of an artistic intelligence. All the women in Quines look at us today with their fearless gazes of hope; their voices demanding better from a world that stupidly thought it could oppress, relegate or distance them from life and from the heady matters of the world. Maya Angelou would have called these Quines phenomenal women and would have hailed Gerda Stevensons achievement too as phenomenal. Quines is a radical collection written by the radical poetic intellect that is the bonnie fechter (intrepid fighter) herself, Gerda Stevenson.' JIM AITKEN, CULTURE MATTERS.
To read Jim Aitkens essay on QUINES in CULTURE MATTERS, click here

Clutch this book of wondrous odes to your bosom  it will gladden your heart, sadden it, but also fill you with pride. What women they were that birthed our Scottish nation and here they are, exquisitely brought to vibrant life, by that contemporary cultural quine, Gerda Stevenson. BARONESS HELENA KENNEDY QC

Quines is simply mind-blowing. It should be a coming-of-age gift to every Scotswoman. JUDY STEEL

A terrific selection of poems, with their sheer variety of character and personality, emotional range, richness of social and cultural reference, metrical and linguistic shifts, a marvellous mix of musicality, energy, gravity and humour, and depth of feeling threaded throughout. STEWART CONN

"this piercingly challenging and beautiful collection by Gerda Stevenson; reading it bites the heart." RICHARD HOLLOWAY

IF THIS WERE REAL 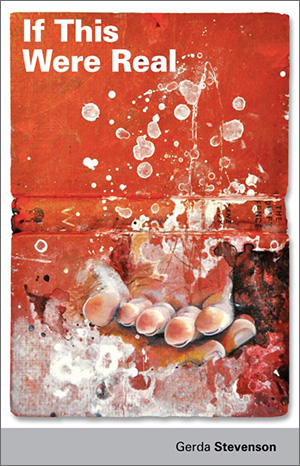 The best of the new in contemporary Scottish poetry - not to be missed. Ron Butlin, Sunday Herald, 1 December 2013.

Review by Kevin McNeil in, THE BOTTLE IMP: If This Were Real by Gerda Stevenson compassionate, defiant and honest. The inherent fallibilities and sad frailties of humankind and nature are explored with an edgy panache. Stevenson finds, and recreates, a magnificent joy. These cool or impassioned, always clear-eyed, poems comfort and disturb, sadden and enlighten; they at once ground and elevate the reader. Though Gerda Stevenson is very much a poet with her own style, If This Were Real put me in mind of Iain Crichton Smith's A Life, both books being autobiographical collections written by remarkable Scots who have had lives rich in moments of eloquence, insight and empathy. Kevin MacNeil, The Bottle Imp (Association of Scottish Literary Studies magazine), 2014

In Co-Op Funeral Parlour, with which Im still light-headed, the speaker contemplates her own child, as the infant lies in a coffin. The poems vertiginous emotional charge is achieved by the unflinching control of the language in the face of intimate, inscrutable devastation  as if daring itself to find the image, and let that image do its dark work. The best poems here fuse figurative and emotional life to haunting effect. Wordpress, 2014.

depth, humanity, music. Love poems in the widest sense. The Eidlon Tree magazine, 2013. Gerda Stevenson was at Atkinson-Pryce for a memorably good evening, reading from her first collection of poetry, "If This Were Real", to a full house. Stevenson's talent as an actress brings a quality to her readings which is quite brilliant. There is no gap in between the essence of the poem and the delivery, which is immediate and intense. During discussion afterwards, it was fascinating to hear her view that her many talents are part of the whole: acting, writing, directing, singing - and poetry reading. Atkinson-Pryce Bookshop, Events webpage, Thursday 5th September, 2013

Review of poetry and song presentation, ROYAL LYCEUM VARIETY NIGHT, 26th February, 2017: This night had a very noticeably Scottish feel to it, with Gerda Stevenson and Rachel Sermanni sharing some absolutely gorgeous and ageless poetry and song. Steve Griffin, Edinburgh 49. Actress and writer Gerda Stevenson was a pleasure to listen to and watch as she performed poetry in monologue form from her forthcoming book. Dedicated to Scottish women who have achieved great things, but mostly gone uncredited for their works, this was a perfect example of how skillful writing can look at things from a unique perspective. Also, of course, with such a theatrical background, classic presentation. Tom King, Southside Advertiser, Edinburgh.

Scotia Nova: Poems for the Early Days of a Better Nation, Luath Press, ed. Alistair Findlay and Tessa Ransford, £7.99 For me, the strongest poem here is Gerda Stevensons Hame-comin. The title refers to Holyroods Homecoming initiative, but this is no holiday. Stevenson adopts the voice of a soldier returning from a tour of duty. The red hackle of the Black Watch (yon cramasie flooer) is compared to bluid, and the soldiers return is marred because their fieres are laid in the grund, and they are haunted by yon bairn [] blew tae hell like a smirr o eldritch confetti. The poem raises questions about Scotlands values, politics and place on the world stage, and doesnt offer an easy answer. Its powerful language shows a complex, mature Scotland. Michael Grieve in THE SAINT, St. Andrews University, February, 2015.

The stand-out poem for me was "I am the Esperance" by Gerda Stevenson, which imagines the creations of the workforce - the floating crane Hikitia, home from Wellington, the Empire Nan, a stout tug, the Delta Queen "her great stern wheel churns the foam / as she steams in from the Mississippi" - "canvas unfurled, freighted with hope, / as wave upon wave, you surge into Glasgow Green" . The Morning Star, reviewing the anthology A Rose Loupt Ooot, published by Smokestack Books.